Does Big Insurance use AARP to pad their profits? UnitedHealth responds.

UnitedHealth, one of the nation’s largest health insurance companies, pumps hundreds of millions of dollars every year into AARP’s coffers in the form of “corporate royalties.” AARP, meanwhile, advocates for policies that financially benefit UnitedHealth even though they may hurt seniors.

We have been confronting UHC and AARP’s lobbying arm about it – and they (albeit confusedly) responded: 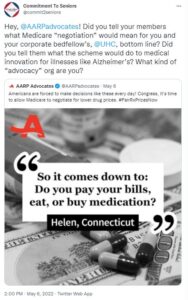 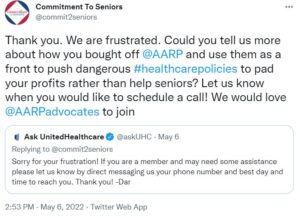 Of course we’re “frustrated!” UnitedHealth has bought off what was once a well-respected seniors organization and turned it into one that openly defends itself in court, claiming it’s not obligated to act “with interest of its members in mind.”

That was the end of that conversation, but we followed up a couple of days later and got another response: 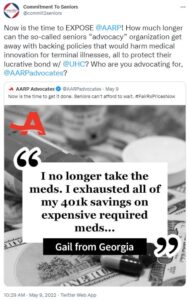 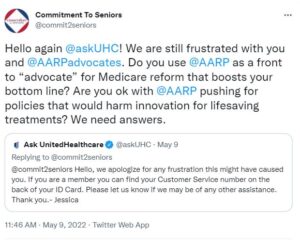 Seniors deserve access to innovative, lifesaving medications, but the AARP’s socialist price control scheme would destroy that access and crush essential healthcare innovation. We’ll continue to press the so-called seniors’ “advocacy” organization for answers until the truth comes out.