Scroll down to find out 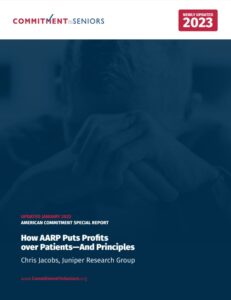 A study conducted by the Juniper Research Group has exposed a serious conflict of interest between the AARP and its corporate funders.

HAS AARP LOST ITS WAY?

While claiming to serve the interests of American retirees, AARP’s true agenda has become increasingly aligned with the financial interests of its corporate partners and well-paid workforce.

If seniors pay $16 per year to belong to AARP, but AARP’s corporate partners pay them over a billion dollars a year, whose interests do you believe they’re prioritizing?

Many argue the tax-exempt AARP has lost its way, becoming more of a marketing and sales platform for large corporations seeking to sell goods and services under AARP’s brand to its captive member audience of millions.

As a result, AARP has been accused of advocating for policies that financially benefit AARP’s corporate partners at the expense of seniors, including price controls that will devastate investments and research into life-saving medicines.

Are you an AARP member?

These are some things you should know

ABOUT COMMITMENT TO SENIORS

Commitment to Seniors is a project of American Commitment.  The mission of the program is to shed light on AARP’s public policy positions, actions and inactions, and AARP’s advocacy and political engagements, and how they impact both their members and their financial partners.

AARP IN YOUR STATE